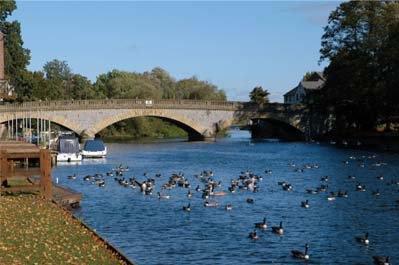 Evesham is a picturesque town with a great shopping offer set along side the beautiful Abbey Park and the River Avon. You’ll find high street names such as Bon Marche and Sports Direct alongside fascinating independent stores and a great selection of café’s and restaurants. The Saturday Charter Market draws traders from across the UK and has become a key attraction for local shoppers as well as attracting visitors to the Vale of Evesham.

There is no more beautiful way of exploring the Vale of Evesham, and beyond, than by cruising the River Avon in anyone of the number of craft that are for hire from Evesham’s riverside - several of which provide their own commentary on local sites of interests and nature reserves. Equally interesting are the delightful pubs and hotels that lie along the riverbanks - each one tranquil and giving a unique perspective of the Vale.

As the river loops around Evesham it passes under the new Abbey Road Bridge which was completed in 2014.

Homme was the Saxon name given to a piece of land in the loop of a river. This homme provided such a superb defensive position that Evesham grew to become a strategic town through the ages. And so the Avon flows on; on past Evesham Marina and Weir Meadow Caravan Park before reaching the weir and Evesham lock with its unusual triangular lock keeper's house.

During the civil war the strategically important bridge at Evesham was destroyed twice and the river blocked by the king's army as they retreated from the Roundheads in 1644. Massey eventually took Evesham in 1645 but it wasn't until Cromwell's death that the navigation was restored and opened to trade. Henry Workman built today's bridge, in 1856, funded by public subscription. Then, the river beneath the bridge was a maze of shallows and treacherous currents, so Workman had it dredged into one channel and constructed the public park beside the river with the dredgings. 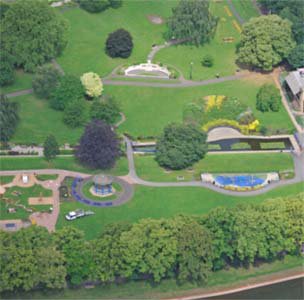 A frequent visitor to Evesham Abbey, during the reign of King Cnut, was Lady Godiva (Godgifu). Prior Efic, of Evesham, was Godiva's friend and father confessor. When he died, the Evesham Chronicle records that he was buried, in Evesham in the presence of Lady Godiva, in the church that she built. The most likely place for this church, which was dedicated to the Holy Trinity, was adjoining the Abbey, but some historians think that Godiva built either the church at Hampton or the original 11th century church at Bengeworth. Looking across the green lawns of Abbey Park you can see the remains of the cloister arch and some of the ancient surrounding walls. Nearby is a substantial portion of the Abbey Gatehouse next to the Almonry - now the town's Heritage Centre. Also along this western side of the river is the long established Evesham Rowing Club , founded in 1863.

Near to Workman bridge, on the eastern bank, is the recently restored public quay, which, for centuries, was the landing stage for goods brought up the river from the sea, via the River Severn at Tewkesbury. Beside the quay once stood Bengeworth Castle, built by the Norman baron, William de Beauchamp, and destroyed by Abbot William de Anderville, (Abbot of Evesham 1149 1159), in retaliation for de Beauchamp having vandalised the abbey and stolen valuable artefacts from the church. For this, de Beauchamp was excommunicated and the Abbot consecrated a burial ground on the site of his castle.

A stroll up Port Street will take you past the newly refurbished Regal Cinema that offers the best in comfortable modern cinema whilst retaining the fully restored charm of its Art Deco origin. Further along Port Street you will find the remains of Bengeworth village with its ancient monuments near the old village green (now the site of the Talbot pub). In Church Street, are the remains of the 13th century tower and porch of the original St Peter's church, dismantled by the Victorians in 1872 in order to build the new St Peter's nearby. Opposite the porch can be seen the remains of Bengeworth Manor - once owned by King Cnut.

The riverbanks are lined with avenues of Lime trees and cater for walkers, anglers and boaters alike - as well as being the main venue for the town's annual Asparagus Festival beginning 23rd April, the VE Vintage Festival and Morris Festival in June, the River Festival and Festival of Sport in July and the Evesham Angling Festival in August.

Evesham is a hive of activity for Tourists and Locals alike, please explore the rest of the site for more information.

The market town of Pershore is situated on the River Avon, approximately 10 miles from Worcester and 6 miles from Evesham. Pershore can be reached direct by rail from London Paddington or via Worcester from Birmingham and the North. There are also good bus connections and Junction 7 of the M5 motorway is only 7 miles from Pershore. The town has been designated as a place of major architectural importance by the Council of Britsh Archaeology and is listed as outstanding conservation area.

Pershore is Twined with with Bad Neustadt in Germany and Plouay in France. 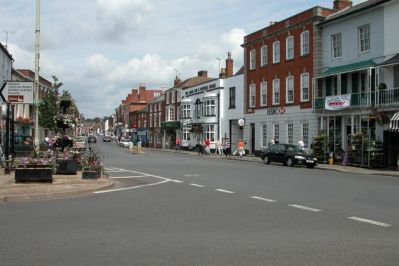 Pershore dates from a remote period - a monastery was founded here in 689. Its principal feature is the church of Holy Cross, which consists of the transept and chancel of the old abbey. The manufacturer of stockings is the chief industry; engineering and machine making are carried on. Large quantities of fruit and vegetables are cultivated in the neighbourhood for Birmingham and other towns. 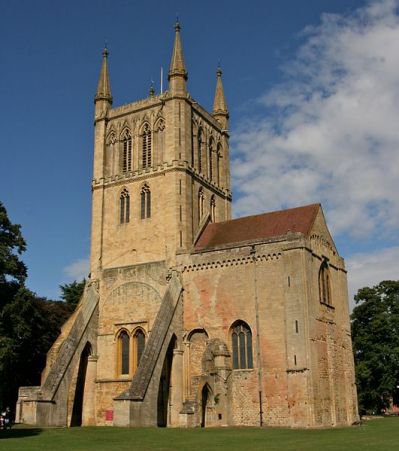 Parts of the abbey, which stand in an expanse of public grassland close to the centre of the town, date from the 11th century. The current structure is far smaller than the original building, which was plundered during the reign of Henry VIII at the Dissolution. The original nave was destroyed. The north transept collapsed later. The present nave occupies the western part of what would originally have been the choir.

Pershore is a very busy town with many events on through out the year. There are many place of interst including Number 8 Community Arts Centre with an exciting programme of events. It is surrounded by beautiful countryside and picturesque villages and is a haven for cyclists and ramblers.

Pershore is renowned for its independent shops which offer the discerning shopper an extensive range of purchases. Pershore also has many specialist shops, an undercover market and welcoming pubs and restaurants.

Pershore Abbey - The foundation of the minster at Pershore is alluded to in a spurious charter of King Æthelred of Mercia (r. 675-704). It purports to be the charter by which Æthelred granted 300 hides at Gloucester to Osric, king of the Hwicce, and another 300 at Pershore to Osric's brother Oswald. It is preserved only as a copy in a 14th-century register of Gloucester, where it is followed by two charters listing the endowments made to the abbey until the reign of Burgred, king of Mercia (852-874).

The church as it now stands represents only a small portion of the original building.

Pershore Abbey has a 25 cwt ring of eight bells. The ringing room is a metal 'cage' suspended high above the chancel crossing; it is accessed by means of two stone spiral staircases, a walkway through the roof, a squeeze through a narrow passage and a see-through iron staircase.

For more information on visiting Pershore:

The charming village of Broadway nestles beneath the Worcestershire hills of the Cotswolds. Today, Broadway attracts visitors from across the world all drawn to the beauty and attractions of this quintessential English village.

The "broad way" is the wide grass-fringed main street, centred around The Green, which is lined with red chestnut trees and honey-coloured Cotswold limestone buildings, many dating from the 16th century.

Broadway is a lively and vibrant village with a superb range of unique shops and designer boutiques, restaurants and hotels but is also steeped in history with its origins dating back to Roman times.

The village is overlooked by Broadway Hill, the highest point in the northern Cotwolds at 309 m (1,014 ft) above sea level, which is popular with hill walkers.

Over the centuries it has made its mark in many different ways. In the 1600s it was a major stopping place for the stage coaches that travelled between Worcester and London with the world-renowned Lygon Arms remaining popular with travellers and visitors.

A couple of centuries later, Broadway emerged as an important centre for the arts attracting such luminaries as JM Barrie, Vaughan Williams, Edward Elgar and American artists Edwin Austin Abbey and John Singer Sargent. These artists were attracted by the beauty of the village and its surroundings in particular the Cotswold stone buildings that somehow seem to become even more beautiful with the passing years.

Today, Broadway is a centre for arts and antiques and serves as a natural base from which to explore The Cotswolds or see the horse racing during the busy Cheltenham Gold Cup week 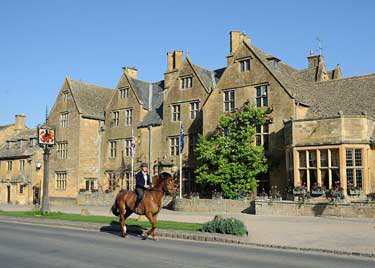 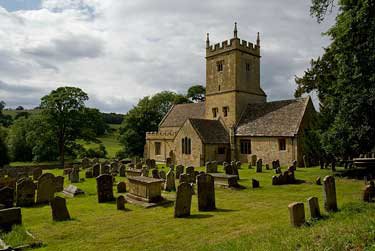 Broadway is lovely to visit all year round and has a full and interesting events calender from the Broadway Arts Festival to the Late Night Christmas Shopping and many diverse events in-between.

Broadway Tower built for the Earl of Coventry in 1798 stands proud at the top of Fish Hill and is the perfect vantage to point view the Cotswolds, the Vale, Malveryn Hill and even the Welsh Borders, and is fact of of the highest point is the whole of the Cotswold.

Gordon Russell Museum located in the original grade 2 listed workshops is well worth visiting during your time in Broadway and The Vale of Evesham celebrating the work of the renowned furniture designer, Sir Gordon Russell.

There are many lovely pubs, tea rooms and restaurants to explore within Broadway mostly do not require booking however during key times of the year including March's Cheltenham Gold Cup Week it is advised to book well in advance for a restaurant table.

The main Broadway parish church is now St. Michael and All Angels. It was built in 1840 within the village of Broadway itself. It has a fine wood carved pulpit transferred from St Eadburgha.

For more information on visiting broadway: