The Battle Of Evesham

The battle of 1265 was about the power of the king and the way he exercised it. This issue had troubled England throughout the 13th century. It had been taken for granted that government was the business of the king, helped by various officials. It was also accepted that he should rule justly and with the support of his barons. However, there was no clear idea what should be done if he failed to do so and mis-used his authority.

One solution had been tried in 1215. The barons rebelled against King John and forced him to accept the Magna Carta. This “Great Charter” was a long list of things King John promised not to do in the future. The charter did not work. Both John and his son, Henry III, broke their promises whenever they could. Complaining groups had to work out a better way to make the king keep his word.

The opportunity arose in 1258. Henry called a parliament, which criticised his policies and drew up new rules for the king to follow. They were known as the Provisions of Oxford (where the parliament met). A permanent council was set up to supervise the appointment and actions of the royal officers. Simon de Montfort was a leading member of the group.

During the next five years, amid shifting political alliances, two things remained constant: de Montfort always wanted to restrict the king’s freedom to govern as he wished and Henry sought to evade such control. In 1264, the two sides were evenly matched and quarrels flared into civil war. Henry’s army was soundly beaten at Lewes. The king himself was captured and Prince Edward also became a hostage.

De Montfort and his allies now ruled England in the name of the captive king. They tried hard to arrive at a lasting settlement and called parliaments in June 1264 and January 1265, but both failed. The parliament of 1265 included a new element: representatives of several towns were summoned to attend along with lords, bishops, abbots and knights of the shires.

At this point de Montfort's support began to crumble. The towns and the Church stayed with him, but his fellow barons began to desert him. The Marcher lords from the Welsh border had been hostile since before Lewes; de Montfort’s sons gave offence to older lords; the new young Earl of Gloucester, Gilbert de Clare felt slighted and a royalist force with French backing landed in Pembroke.

On 28th May 1265, Edward escaped from his guards to join with Roger Mortimer of Wigmore and the Earl of Gloucester. The civil war resumed.

Early on the morning of 4th August de Montfort awoke to learn that troops under Prince Edward’s standard – the familiar three lions of the royal arms – were positioned on Greenhill. He took his leave of Walter de Cantilupe, Bishop of Worcester, embracing him and receiving his blessing. Simon addressed his knights, offering any who wished the opportunity of absenting themselves from the impending conflict.

As he rode out of Evesham up the bare slope of Greenhill, his standard – a lone lion with divided tail – proudly displayed, the task confronting Simon de Montfort must have seemed formidable indeed. The terrain clearly favoured Edward and the royalists were heavily advantaged, hugely outnumbering de Montfort’s men three to one.

De Montfort attacked without delay, leading his men into what was to be a massacre, as Edward’s vengeance was terrible and fierce. De Montfort's knights tried to force their way through the centre. Attempts to break out, first through one wing, then the other, proved unsuccessful, being defeated with heavy casualties.

Edward had selected twelve of his strongest and most able men-at-arms to seek out and kill Simon de Montfort once the battle was under way. He was surrounded and unhorsed, yet continued to fight bravely on foot. Swords clashed as a storm brewed overhead. As thunder roared, de Montfort was encircled. Several beat him to the ground and struck with their steel. Finally, Roger de Mortimer swung the final and fatal blow. His body was cruelly dismembered.

Many of de Montfort's leading supporters also died. Bodies and the wounded lay everywhere and blood ran through the Abbey Church.The last of Simon de Montfort's knights were eventually overcome close by the spring which became known as Battle Well.

The Abbey and town were pillaged. Robert of Gloucester described it as “a murder of Evesham for battle it was none”. De Montfort's remains, and the bodies of his son Henry and that of Hugh le Despenser, were carried away by the monks and buried near the High Altar of the Abbey.

A feature of the battle, one of the bloodiest battles ever to be fought in England, was that the royalists took few hostages, contrary to the usual practice of ransoming important figures. The losses suffered by Edward’s troops were relatively light.

After the battle, King Henry was found unharmed and set free, and the royal authority restored. For the time being the experiment of limiting the royal power was over and Prince Edward’s influence was dominant even before he became king in 1272. 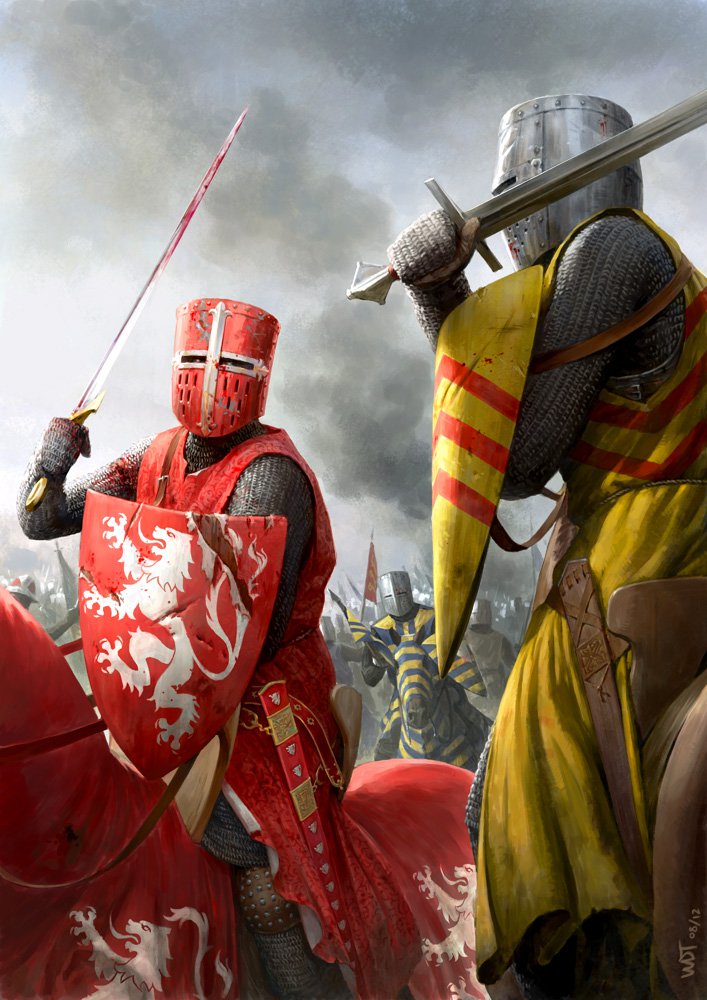