The source of the River Avon is near the village of Naseby in Northamptonshire. For the first few miles of its length (between Welford and the Dow Bridge on Watling Street) it forms the border between Northamptonshire and Leicestershire. On this section, it has been dammed to create Stanford Reservoir. It then flows in a generally west-south-westerly direction, not far north of the Cotswold Edge and through the Vale of Evesham, passing through the towns and villages of Welford, Rugby, Wolston, Leamington Spa, Warwick, Stratford-upon-Avon, Welford-on-Avon, Bidford-on-Avon, Evesham and Pershore, before it joins the River Severn at Tewkesbury.

From Alveston weir (2 miles upstream of Stratford-upon-Avon) downstream to Tewkesbury and the River Severn, the river has been rendered navigable by the construction of locks and weirs. The Stratford-upon-Avon Canal links to Avon through a lock in the park in front of the Royal Shakespeare Theatre in Stratford-upon-Avon. Navigation on the River Avon is restricted to boats with a maximum length of 72ft (21.94m), beam of 13ft 6in (4.11m), height of 10ft (3.04m) and draught of 4ft (1.18m). 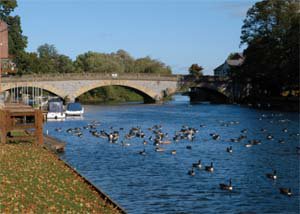 Evesham is surrounded by some of the most beautiful countryside in Britain and none of it more than half an hours drive away from the town centre.

Riverside Villages: catch up with the River Avon as it meanders through the tranquil settlements of Fladbury, Cropthorne and Charlton. Full of black and white timbered buildings, thatched roofs, charming pubs and well-maintained gardens, these are villages for ambling slowly through.

Off Shakespeare’s Beaten Track: avoid the noise and speed of the usual route to Stratford-upon-Avon by diverting through Offenham, Blackminster, Bretforton, and Honeybourne. Home to generations of growers but with surprising histories, each is well worth a stop and explore. Take in the country’s only permanent maypole, a garden centre owned by descendants of Tolkien, a 15” Century National Trust pub and the Domestic Wildfowl Trust on your way.

The North Cotswold Run: will take you far from the maddlng crowd on a jaunt through some of the most stunning views over countryside you’lI ever see. Starting from Evesham and driving through Bretforton, Weston-sub-Edge and Chipping Campden before reaching Broadway and beyond, you will travel down winding lanes, through historical villages, taking in National Trust properties, Dover’s Hill, lavender fields, art galleries and a deserted medieval abbey.

High on a Hlenc: the Lenches (the name derives from the Anglo-Saxon term hlenc, meaning hill) form a ridge to the north of Evesham that is almost unparalled in beauty. The cluster of villages known as the ‘Lenches’, includes Atch, Rous, Sheriff’s, Church and Abbots, nestle in the dips and furrows of this ancient settlement. Take note of the half- timbered architecture, orchards, the Bull at Throckmorton (said to be the inspiration for the Bull in the Archers) before diverting on to Hillers Farm shop and Ragley Hall.

Brooding Bredon: this intriguing area on the outskirts of the Vale is well worth a visit for woods, Iron Age hill forts, standing stones, and nature reserves. From Evesham drive to the village of Ashton under Hill and from there explore round to Beckford Silk, Toff Millway’s pottery, catch up with the River Avon as it meanders through Eckington, and make a stop in Queen Elizabeth I’s old haunt of Elmley Castle. A must is getting out and stretching the legs with a brisk walk up the hill to Parsons Folly and the Elephant Stone, both within the boundaries of a large Iron Age settlement.

All of the above routes can be found in greater detail at the tourist information office.